When your child struggles to speak: Childhood Apraxia of Speech 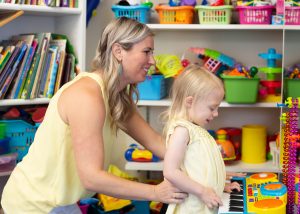 Childhood Apraxia of Speech (CAS) is a speech disorder in children that makes it difficult for a child to speak. With this disorder, the brain struggles to develop plans for speech movement and then can’t tell the muscles that move the lips, jaw, and tongue how to move to make accurate speech sounds.

According to Claire Rosenkild, a Speech Language Pathologist (SLP) at Pediatric Therapy Center, there are no standardized tests to diagnose CAS. Instead, a SLP will determine if the child has Childhood Apraxia of Speech through observations and assessment.

Some common signs and symptoms that could indicate your child has CAS include:

Typically, children are diagnosed with CAS around the age of three, though signs of apraxia are often present at a much younger age. The cause of childhood apraxia of speech is unknown. 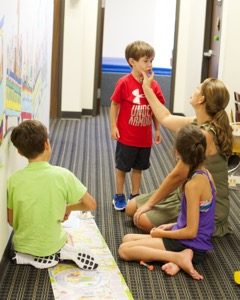 Childhood Apraxia of Speech and other Development Delays

Claire notes that sometimes CAS can accompany other development delays including:

“However, a diagnosis of apraxia of speech doesn’t mean that a child will have difficulties in other areas, and this disorder can occur completely independent of other developmental delays.” Claire adds.

If your child seems to struggle with their speech or making sounds, it’s important to seek help from a Speech Language Pathologist. To test for Childhood Apraxia of Speech, the SLP will look at your child’s oral-motor skills, speech intonation, and how they say different sounds.

If your child is diagnosed with apraxia of speech, an individualized therapy treatment plan will be set up to help your child.

Claire explains, “The child’s family and the Speech Language Pathologist will work closely to develop a plan for the child. Many children with CAS benefit from a motor learning approach that involves visual, tactile, and auditory cues, as well as repetition to help the child learn how to produce speech. (Much like developing the muscle memory needed for something like learning to ride a bike.)”

“Just like all speech and language disorders, prognosis depends on the severity of the case, but many children learn how to speak intelligibly after getting the right therapy treatment.” Claire adds.

What Parents Can Do to Help Their Children With CAS

As mentioned above, at Pediatric Therapy Center an individualized therapy treatment plan will be developed specifically to address your child’s case. Parents are encouraged to participate in the therapy treatments by learning cues and a systemic approach to motor learning so that they can demonstrate and model speech for their children at home.

Early intervention is important to make changes in speech while avoiding some of the frustration that comes from being unable to effectively communicate. Don’t “watch and wait” if you notice any of the signs and symptoms of CAS, schedule an appointment with one of our Speech and Language Pathologists.

Pediatric Therapy Center (PTC) offers exceptional, patient-centered occupational, physical and speech/language therapy for children. If you feel your child is exhibiting any signs of speech difficulties, or is struggling developmentally in any way, call PTC at 713.772.1400 for a consultation with one of our experienced therapists today.